"I was raised to think single-wides were for desperate people. Buying one showed me just how wrong I was."

It’s an early fall day and I’m standing under a canopy of white pines trying to imagine the 66-foot-long metal box where my wife, Ashley, and I will spend the rest of eternity.

The mobile home company hasn’t even started grading our land—a wooded half-acre plot in Western North Carolina—but I blink back tears as I fight a vision of trailer life my family embedded deep in my brain. That our future will be wrapped in cheap vinyl siding and gauche paneling. That our rutted gravel driveway will be littered with crabgrass and chickweed. That jettisoned beer cans and brightly-colored kids’ toys will one day magically appear outside our trailer, even though we don’t drink and have no plans of reproducing.

“We’re not failures, right?” I ask my wife, voicing an ignorance that embarrasses me even as I say it. “We made the right decision?”

Ashley, the level-headed one, clucks her tongue and rubs my back. “Baby,” she coos. “There’s absolutely nothing wrong with living in a single-wide.”

I know she’s right. But every fiber of my upper-middle-class, socially-competitive upbringing is writhing.

THE HOUSE WHERE LAUREN STEPP WAS RAISED. SHE PROVIDED THESE PHOTOS.

THE LAND WHERE LAUREN AND HER WIFE WILL PLACE THEIR TRAILER.

I grew up in a 2,500-square-foot Cape Cod—a sprawling home with steeply-pitched ceilings, droll dormers, and festive wreaths on the front door.

My mom, the daughter of a New York City accountant, cared a lot about image. And my dad, the youngest of 12 kids raised dirt poor in the mountains of North Carolina, was desperately trying to outrun his roots. Wed together as husband and wife, they created the perfect storm of vanity—a cyclone of ritzy clothes, Martha Stewart-endorsed tableware, new cars, and surface-level impressions.

Outdoing neighbors, co-workers, relatives, and even strangers soon became an addiction, for my mom especially. Every evening after school, my older brother and I would sit in the parking lot of Asheville’s Biltmore Square Mall while she shopped. Andrew would blast AC/DC, stewing in his pre-teen angst, and I would trace giraffes and kittens in the window condensation. Hours later, right when I would start to drowse, my mom would appear in a flourish of crinkly shopping bags and perfume.

This would repeat, day after day after day. Sadly, my parents invested in other peoples’ opinions to the point of financial ruin. By the time I was in middle school, they had claimed bankruptcy once and refinanced the house twice, each time draining the home of its equity. Meanwhile, we ate freezer-burnt venison for dinner, scrounged in couches for gas money, and borrowed thousands of dollars from my aunt to keep the lights on.

Even as a kid, I knew my parents were bad with money. But still, I was swept up in their cyclone of vanity. Well into my early 20s, I associated happiness with nice clothes, nice cars, and—above all—a nice house. I believed mobile homes were only for people like my uncle Lewis, who worked as a butcher at Food Lion. Or, the kid in my fourth-grade class who came to school with greasy hair and crusty eyes.

Of course, I can’t entirely blame my parents for my skewed thinking. The stigma of single-wides is deeply embedded in Appalachia, its roots running back to the late 1800s.

In the wake of the Civil War, most corners of America became increasingly industrialized while Appalachia held tight to its rural and self-sufficient ethos. As a result, outsiders began perceiving the region as uncouth and unrefined. According to an April 1900 edition of theNew York Journal, Appalachia was a place where the “untrammeled white citizen”—a hillbilly—“has no means to speak of, dresses as he can, talks as he pleases, drinks whiskey when he gets it, and fires of his revolver as the fancy takes him.”

This image of a barefoot, gun-toting, liquor-drinking, cabin-dwelling mountain man soon became a celebrated part of America’s iconography. The hillbilly trope debuted in books, advertisements, comic strips, and major motion pictures. And though these depictions were neither flattering nor entirely accurate, they were very profitable.

Today, not much has changed. Pop culture is still obsessed with the novelty of poor, white Appalachians. Novels and Netflix series portray hillbillies (A.K.A. rednecks), as God-fearing, cigarette-smoking patriots who shoot guns, sip Mountain Dew, and cook meth all from the comfort of—you guessed it—their single-wides.

On screen, you’ll never witness a Hallmark family bake cookies in the cramped galley of a mobile home. Or, a small-town florist kiss an old flame in a single-wide. Or, a world-weary writer find the magic of friendship on the front porch of his trailer. No, happy and cheery plots must unfold in stunning mansions and well-appointed cabins. There simply isn’t space for them in manufactured homes. Alas, the stigma lives on. And challenging it isn’t easy.

When my wife and I bought our property, we had plans of building a tiny home—perhaps a 300-square-foot cabin with copious windows and cedar shakes. Something idyllic and inviting. But we almost instantly ran into issues.

The architect quoted us at $2,500. The contractor demanded $160,000 plus the cost of site work. Only a handful of banks wanted to finance a structure so small and most companies balked at the idea of giving us homeowners insurance. Peeved but undeterred, we began toying with the idea of ordering a cabin kit, trying to remodel a shed, or even living in an RV. But again, we hit roadblocks. Each option either proved to be illegal or highway robbery.

That’s when Ashley mentioned the idea of buying a single-wide. I instantly recoiled like I had been stung by a yellow jacket.

But the idea kept creeping back into my brain. A mobile home would cost $60,000—a fraction of the cost of a stick-built tiny home—but offer triple the space. We could customize the house over the years, adding hardwood floors, open shelves, and a quaint wood stove. We could even build a back porch.

I chewed on the prospect for weeks, craning my neck to look at mobile homes as we drove down country roads, trying to envision myself living there. I scoured Reddit forums and read articles with titles like “10 Advantages of Mobile Homes” and “3 Reasons Why Single-Wides Are Better Than Stick-Built Homes.” Despite the convincing rhetoric, I wasn’t sold. A single-wide just wasn’tcute.

Perhaps secretly wanting my parents to affirm my biases, I came clean about the tentative mobile home plan one night over dinner.

“We’re thinking of buying a single-wide,” I breathed, toying with the corner of my placemat.

We sat at the same table where I carved pumpkins and did homework as a kid, but everything was different. My parents looked tired, unwell, and, to be blunt, miserable. The month prior, my dad had been diagnosed with a terminal lung condition, likely caused by the carcinogenic chemicals he used at the paper plant. Meanwhile, my mom was nursing ailments of her own: pulmonary hypertension, a malignant lung tumor, and an infected tooth.

Unable to afford mounting medical bills on top of credit card debt, they had just filed for bankruptcy. Again.

“I know you won’t approve,” I said, hesitant. “But a single-wide is the cheapest, most practical solution.”

As expected, my mom moaned and growled. “You cannot,” she said, her speech slurred by the raging molar. “No, you will not! I simply won’t allow it.”

The dining room fell silent for a beat. I looked across the table at my dad. His goatee was now the color of milk, the circles under his eyes a purple bruise. His head was balding and liver spots freckled his cheeks.

He took a deep, raspy breath and then picked up his fork to busy his hands.

“We’ve made a lot of mistakes over the years. Getting into an expensive house, trading cars too often, buying stuff we didn’t need,” he said, his southern drawl thick and slow. “We worked our lives away and here I am, dying, with nothing to show for it. Don’t do that. Learn from our mistakes. Buy the damn single-wide.”

Then, without making eye contact with any of us, he got up from the table and left his plate of food untouched. We bought the damn single-wide the next day.

Now, I’m standing under a canopy of white pines trying to imagine the 66-foot-long metal box my wife and I will call home. Picturing the long, narrow structure, I’m keenly aware of the stigma. I know some family members will raise eyebrows and that passersby will make assumptions about the type of people living inside.

But I’m starting to care less about those things and more about what the single-wide will afford us. With a manageable mortgage, we will have the financial latitude to buy health insurance, groceries, and gas, and still set money aside for the future. Sure, we won’t have a sprawling Cape Cod with festive wreaths and droll dormers. But in its place, we’ll have something even more valuable: peace of mind.

I look up at bits of blue piercing the trees’ canopy and see a shadowy figure, likely a red-tailed hawk, making slow, looping circles. I breathe deeply, the air smelling of buttery pinesap, and know that we will be OK.

“We’re going to have a house,” I tell my wife, giving her hand a gentle squeeze.

Lauren Stepp is a lifestyle journalist from the mountains of North Carolina. She writes about everything from fifth-generation apple farmers to mixed-media artists, publishing her work in magazines across the southeast. In her spare time, Lauren mountain bikes, reads gritty southern fiction, and drops her g's. 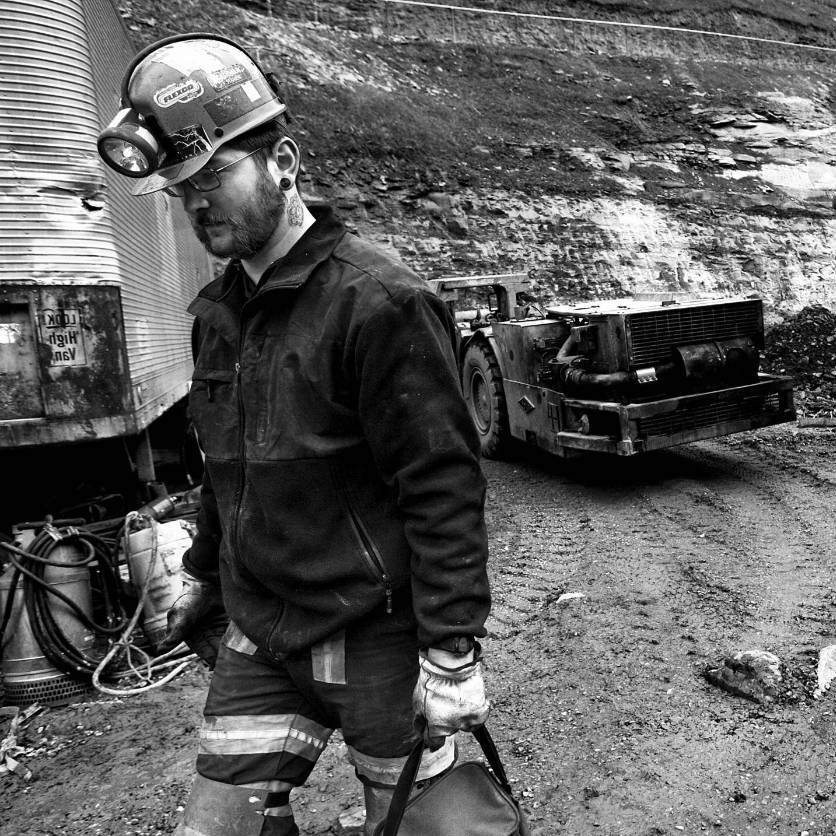 A CLEAN LIVING:
WHAT A MINER LEARNS SELLING SEX TOYS

After years of mining underground and putting my body at risk, I desired something more, something a little safer. As side gigs, I had run a music venue that was good enough to gain the attention of National Geographic. 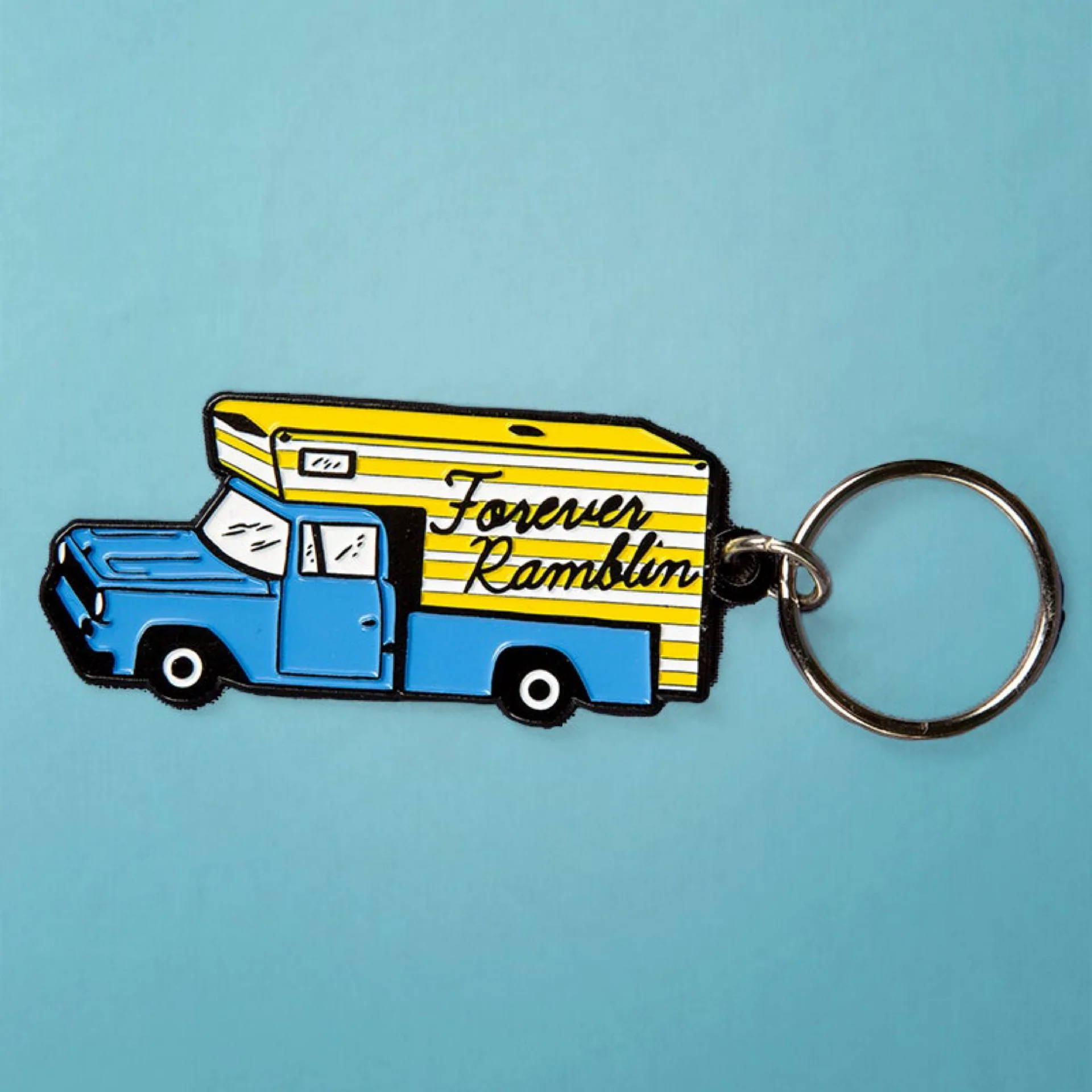 Prone to ramblin? Then this keychain was made for you. It’s 2.75” wide and made by Kin Ship Goods in Charleston, West Virginia, a small business that draws inspiration from rabble rousers, mountain mornings, labors of love, and dusty keepsakes. 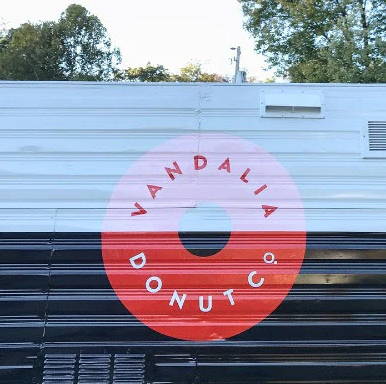 Is it presumptuous to say a couple selling doughnuts out of a 1960s trailer can grow the local economy?Probably.But Charleston natives Stephanie and Josh Woody might be on to something.